The SEAT PLEASANT VOLUNTEER FIRE AND COMMUNITY WELFARE ASSOCIATION, INC was organized in 1915 and incorporated in 1916 by a civic minded group of Seat Pleasant citizens for the purpose of providing fire protection for their neighbors and towns people. As a welfare group, the fire department members provided food baskets and clothing for unfortunate persons in the area of Seat Pleasant during the Thanksgiving and Christmas Holidays. This charity service continued for a period of more than thirty years.

The original firehouse building was a single story one-bay masonry structure which was later expanded with the addition of a second story and widening to accommodate three pieces of apparatus. Our first piece of fire apparatus was a Model T Ford Smith-Form-A-Truck, built from a 1916 Model T Ford, carrying two 30-gallon soda-acid chemical tanks; 200 feet of ¾ inch booster hose and 300 feet of 2 ½ inch fire hose. The 2 ½ inch fire hose was donated by the District of Columbia Fire Department. This piece also contained the usual complement of axes, two portable 2 ½ Soda-Acid Fire extinguishers, and rope for pulling down chimneys. In addition, the truck carried a 14 ft ladder and ceiling hook.

The first alert-siren ever used by the department was a World War I vintage Air-Raid Siren that had been located atop the District Building at 14th and E Streets NW Washington, DC. This siren was donated by the District of Columbia Government and was used continuously for 39 years by Company 8. Until early 1965 this same siren was still in use, on loan to the Bryan’s Road Fire Department in Charles County, MD. It too, was their first siren.

Seat Pleasant has enjoyed the honor of furnishing many fine leaders to the County Association, two of whom were elected County President: Clarence M. Mace and John McBrown.

Upon issuance of a new charter in 1956, the organization changed its name to the SEAT PLEASANT VOLUNTEER FIRE COMPANY, INC. As our company number “8” indicates, we were one of the original organizing companies of the Prince George’s County Volunteer Firemen’s Association. Mr. Ralph White was one of the the Charter members of the county association. He later served as its treasurer.

Seat Pleasant was the originator of the “1/10 of 1% Fire Tax” idea and was instrumental in the passage of the first “Election District Fire Tax.” It has always been the goal of this organization to promote new and diverse ideas to benefit the member companies of the county group.

The original firehouse was locate at 6816 Roosevelt Ave (now Martin Luther King Hwy) and was built of donated materials and labor furnished by the towns people of Seat Pleasant. This site is later occupied by a Suburban Trust Company. Our present building was constructed in 1958 at “No. 50” Addison Rd (now 6305 Addison Rd) on property obtained from the town.

This department enjoyed having a very active Ladies Auxiliary and they cooperated in every function of the fire department. They operated BINGO and other fund raising activities to the extent of having contributed more than $40,000 to the department in over twelve years. Those fine women also served as volunteer firefighters and manned apparatus during the Second World War when members were scarce.

An interesting highlight of the department’s heritage was “Duffy’s Stadium,” which was located in the now 6800 Blk of Martin Luther King Jr Hwy (formally George Palmer Hwy), was owned and operated by the Seat Pleasant Fire Department. The stadium drew large crowds to professional boxing matches, football, baseball, soccer, and many other activities. This enterprise flourished until after WWII.

Seat Pleasant is proud of its leader both past & present. One such man was Irwin I. Main, who served as Chief of Seat Pleasant VFC for over 18 years, also served as the PG County Government Chairman of the Maryland National Capital Park and Planning Commission for serval terms. Another famous member was George N. Palmer, who laid the first brick in the old firehouse building. Maryland Route 704 was named in memory of him.

Many years of hard work and tradition are the result of an extremely dedicated membership who have helped build a fine and worthwile fire protection organization for the people they serve. 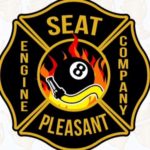